Kala(Art) Kuwait proudly announce that this is the 15th consecutive year of NIRAM has been conducted on the occasion of Children’s Day, the birth day of Pandit Jawaharlal Nehru, the first Prime Minister of independent India. It is worthwhile to note that students of different nationalities from all 24 Indian Schools in Kuwait with the active participation of more than 2800 children in the competition. The School Managements as well as Indian Community including business establishments as sponsors have also voluntarily extended their entire support to this wonderful event.

Winners of Painting Competition titled “NIRAM 2019” have been adjudged by the well-known Artists Mr. John Mavelikkara, Mr. Sunil Kulanada, Mr. Nikesh and Mr. Maheendran appointed by the Executive Committee of “Kala(Art) Kuwait” and accordingly the Lists of Winners are being released by the organizers as follows: 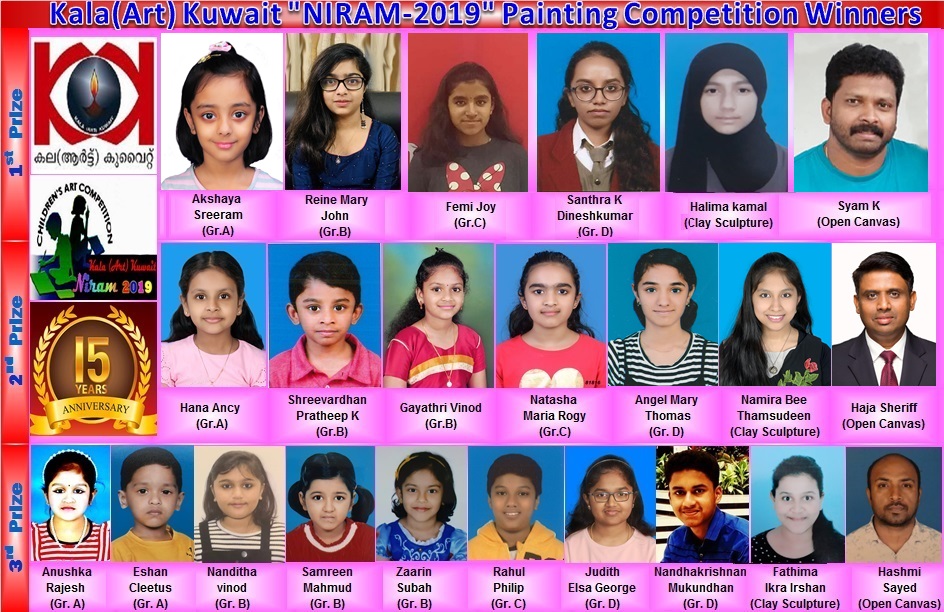 C. Bhaskaran Memorial Trophy as a tribute to Late. Mr. C Bhaskaran, one of the founder and advisory board member of Kala (Art) Kuwait, won by IES-Bharatiya Vidhya Bhavan, the school from which maximum numbers of students were participated in this event.

The organizers announced that the entire winners list consisting 1st, 2nd, 3rd, and 66 Merit Prizes as well as 195 Consolation Prizes (Total 281 Prizes) have already been forwarded to all participated Schools. The List may also be available at our website www.kalakuwait.net.

Kala(Art) Kuwait has congratulated all the Winners and also thanked all the participants and the School Managements, Sponsors, all Indian Associations for their wholehearted support to make the event as a great success and well supported by Kuwait's English & Malayalam dailies and Web Portals. The organizers convey their heartfelt thanks to the Parents, Art Teachers and the management of Indian Community School-Khaitan for their unprecedented support for this wonderful event, according to ‘Kala(Art) Kuwait’ President, Mukesh V. P., General Secretary, Siva Kumar, Treasurer, Hassan Koya, NIRAM-2019 General Convener, Jaison Joseph & Registration Convener Sunil Kumar.